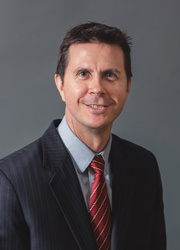 Paul has 28 years of industry experience and joined Conoco in 1988 as a Financial Analyst in Ponca City, Oklahoma. During his career with ConocoPhillips, Paul has held various Finance, Accounting, and Planning roles supporting the company’s marketing, transportation, and Exploration & Production operations. This includes working in multiple locations throughout the U.S., as well as Southeast Asia.

Before moving to Alaska in November 2015, Paul was Finance Manager for the Malaysia business unit in Kuala Lumpur. While there, he was elected to the board of the International School of Kuala Lumpur, a non-profit school, and served as Treasurer. Prior to his assignment in Malaysia, he was based in Houston managing all finance activities for ConocoPhillips’ operations in Algeria. He also served as Finance Supervisor for the Vietnam business unit from 2004 to 2007. From 2002 to 2004, Paul was based in Singapore as the Regional Finance Coordinator. Prior to that assignment, he was based in Jakarta as Financial Specialist.

Paul currently serves on the boards of the Anchorage Chamber of Commerce and the Alaska Economic Development Council.