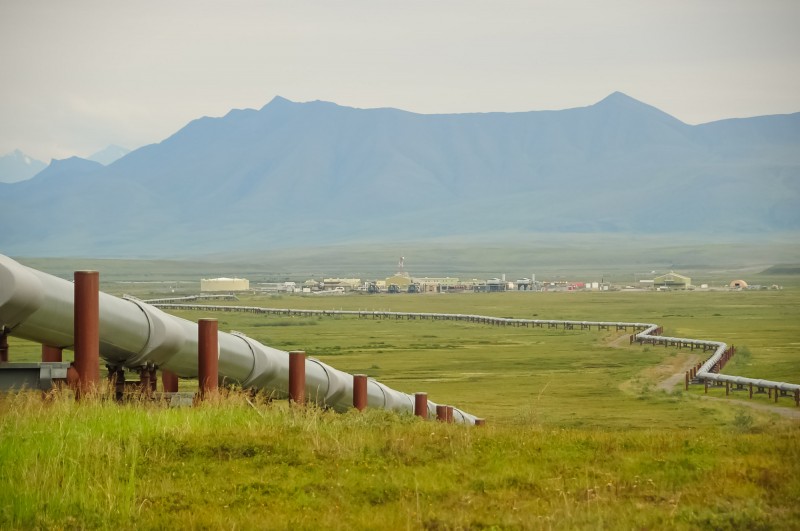 The Trans-Alaska Pipeline System (TAPS) was the world’s largest privately funded construction project when it was built, at a cost of $8 billion. The system includes the 800-mile-long pipeline, which runs from Prudhoe Bay to Valdez, and the Valdez Marine Terminal, where oil is loaded onto tankers for shipment to market.

The pipeline has become an engineering icon and has set a standard for design which endures to this day. Its distinctive zig-zags allow the pipe to flex in the event of an earthquake. More than half the pipeline runs above ground so that the hot oil does not melt the permafrost that is prevalent along the route. In those areas, the pipeline is elevated on 78,000 refrigerated vertical support members. Construction of the pipeline project began in April, 1974 and finished in June, 1977. A total of 70,000 people were involved in building the line.

TAPS is run from Alyeska's Operations Control Center in Anchorage and is monitored 24 hours a day, seven days a week. The pipeline is protected by three separate leak detection systems. The system includes 71 gate valves that allow operators to stop pipeline flow in four minutes.
For more information, visit the Alyeska Pipeline website.

TAPS was originally built with 11 pump stations and reached a peak throughput of about 2.1 million barrels on Jan. 14, 1988. Since then, throughput has declined and is averaging less than 560,000 barrels per day in 2013. It now takes a barrel of oil about two weeks to travel from Prudhoe Bay to Valdez, meaning it can cool and thicken along the way, especially in winter. The number of pump stations has been reduced to four, and Alyeska is taking a variety of engineering approaches to dealing with the reduced flow.