Before drilling a well, our geologists and engineers complete a full analysis of the geology using proprietary and public data. 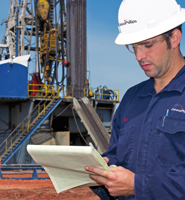 They assess results from other wells drilled in the vicinity, including water wells, producing oil and gas wells and nonproducing wells (dry wells). A plan is developed for drilling and completing the well that must be approved by regulators. The company proactively engages key stakeholders including local communities, elected officials, government agencies and regulators, as we develop these plans.

ConocoPhillips operates thousands of wells around the world and, each year, drills hundreds more. Ensuring well integrity is essential for environmentally sound, safe production of oil and natural gas.

We can drill wells both vertically as well as horizontally, enabling us to develop large resource areas from a single location, minimizing our impact on the environment. Various completion techniques, such as hydraulic fracturing – also referred to as fracking – are then used to create an effective connection between the well and the targeted hydrocarbon-containing formation, thereby providing a pathway for oil and gas to be produced.

Following the construction of a well pad, a large hole is drilled to a shallow depth. A relatively short length (typically 40 to 120 feet) of large-diameter steel pipe, known as conductor casing, is set to stabilize the ground at the top of the well.

Drilling continues to a predetermined depth below the base of usable water. This depth is specified by regulators for the purpose of protecting potential usable groundwater resources and is based on local geology. While drilling this section, drilling mud – a mixture of fresh water and clay – is pumped into the hole to cool the drill bit, remove any cuttings and create a boundary between the well and surrounding rock.

The drill pipe and drill bit are removed, and a steel casing is inserted. Cement is pumped through the casing, filling the annular space between the outside of the casing and the wellbore. This creates a sealed container that extends from the surface to below the base of freshwater zones. The blowout preventer is then installed at the surface.

Following a series of tests, drilling resumes until it reaches the kickoff point – then a specialized motor is added to the drilling assembly that allows the curved and horizontal sections of the well to be drilled. The kickoff point is typically thousands of feet below any freshwater zones.

Getting the Oil and Gas Out

After drilling the well and installing another string of casing, only the section of casing within the hydrocarbon formation is perforated to let oil or natural gas in. In many cases, the process ends here and the well is ready to produce oil or natural gas. Other wells require further techniques to complete the well, such as hydraulic fracturing, a proven technique that has helped develop oil and natural gas resources safely for more than 60 years.

Hydraulic fracturing is essential to produce oil and natural gas trapped in low-permeability rock formations. By using fluid pressure to create tiny fractures in rocks deep underground, it significantly improves the recovery from the reservoir by stimulating the movement of oil and natural gas.

The process begins by injecting a fluid consisting of water, sand and a small amount of chemicals – some of which can be found in common household and food products – through the perforations to create cracks, or fractures, in the rock. Sand or ceramic particles, called proppant, are carried by the fluid and deposited in the narrow fractures, creating a pathway for oil or gas to reach the well.

A plug is set inside the casing to isolate the stimulated section of the well. The entire perforate-inject-plug cycle is then repeated at regular intervals along the horizontal section of the well. Finally, the plugs are drilled out, allowing the oil or gas and fluids to flow into the wellbore inside the casing or tubing and then to the surface, where it is separated, and the fracturing fluid is captured in steel tanks or lined pits. The fracturing fluids are then disposed of using government-approved methods.

Hydraulic fracturing operations generally occur over a 3- to 5-day period. The entire well construction process – including hydraulic fracturing – takes about two or three months. The well is then ready for 20 to 30 years of productive life.